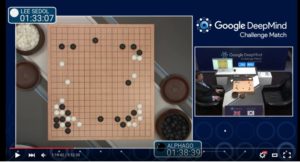 Over the years there have been a plethora of attempts to distinguish between leadership and management – and then those who take the position that the two are just synonyms.

Have no doubts – I do take a position in this long-term discussion. 🙂

My short and unscientific description of the difference between the two is that Management is about systems and processes, whereas Leadership is about people.

However, this post is not about trying to differentiate between the two.

I want to argue that to have success as a leader/manager that you have to master both sets of competencies!

Successful leaders master both the specific professional competencies of the area of business where they are managers. At the same time, they also master the art and science of people.

Just like we humans are equipped with two legs – a successful leader also needs two legs – management and leadership. As with us human beings, we function best if both legs are equally long. People who are in the unfortunate situation to have legs of two different lengths, experience many physical issues which can be linked back to this imbalance – issues with their back, hips, knees, etc.

The same with leaders – they need to be balanced. A leader who focuses more on leadership than management, will create a business that maybe has difficulty developing a business strategy – or difficulty understanding its own finances – or difficulty in operations.

On the other hand – a leader who focuses more on management may have all the systems and processes in place – but without people who are motivated to actually create results, the results will be at best mediocre. 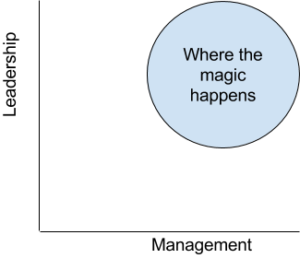 Just for my own benefit, I drew the above figure – and I think it actually sums up the concept pretty well. I could probably pep it up with what happens in the three other quadrants – but that will have to wait until another post.

The point is – the magic happens when you have a healthy balance between management and leadership. This is where success appears for leaders.

Good luck to everyone striving for this balance!

Physicians take the Hippocratic oath.
Why? Because through their work, they have a huge impact on people’s lives and well-being and actually have a position where they could do physical harm to their patients.

What about leaders?
We don’t really fear that they physically will inject poison into our veins…
But in reality, leaders have a position of power where they too have a huge impact on people’s lives and well-being – and where, in reality, they can actually do psychological harm to their employees.

That is why I would like to take this opportunity to bring your attention to The Leadership Oath – a movement which envisions a day when business leaders will hold themselves to the higher standard of integrity and service to society that is the hallmark of a true professional.

I, personally, took this oath a number of years ago and strongly encourage every leader to take the oath – and to help others do the same.

As a business leader I recognize my role in society.

My purpose is to lead people and manage resources to create value that no single individual can create alone.

My decisions affect the well-being of individuals inside and outside my enterprise, today and tomorrow.

Therefore, I promise that:

I will manage with loyalty and care, and will not advance my personal interests at the expense of my enterprise or society.

I will understand and uphold, in letter and spirit, the laws and contracts governing my conduct and that of my enterprise.

I will refrain from corruption, unfair competition, or business practices harmful to society.

I will respect the human rights and dignity of all people affected by my enterprise, and I will oppose discrimination and exploitation.

I will respect the right of future generations to advance their standard of living and enjoy a healthy planet.

I will report the performance and risks of my enterprise accurately and honestly.

I will invest in developing myself and others, helping the management profession continue to advance and create sustainable and inclusive prosperity.

In exercising my professional duties according to these principles, I recognize that my behavior must set an example of integrity, eliciting trust and esteem from those I serve. I will remain accountable to my peers and to society for my actions and for upholding these standards.

This oath I make freely, and upon my honor.

I have no affiliation with The Oath Project – I just believe this is a piece in the puzzle of 21st century leadership.
Maybe even a significant piece…!

Please comment if you do take the oath – or have already taken it.